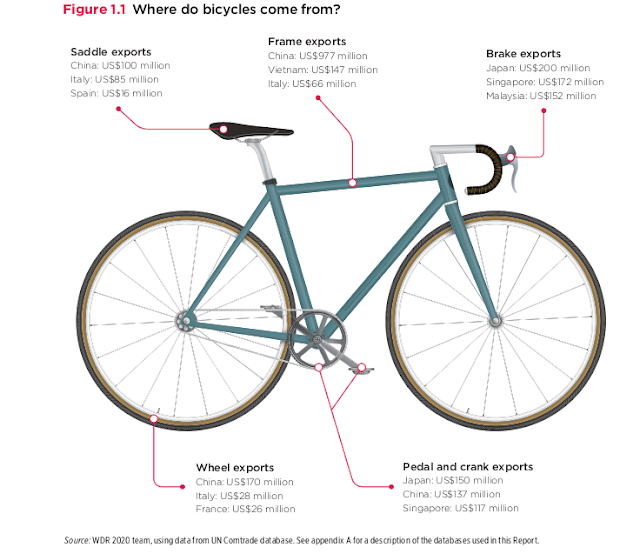 which firms fine-slice production processes and disperse activities over multiple countries. Most

international trade no longer involves exchanging finished goods but rather intermediate inputs, which

firms increasingly use to produce their own exports. Many firms only concentrate a sliver of the value

chain in their home country, not the production of entire goods. Furthermore, they connect more and

more with foreign value chain partners to make final goods and services. As a result, trade in

Firms can connect with foreign value chain partners in two directions to produce goods and services:

upstream and downstream. Upstream, they can import intermediate inputs from their foreign value

chain partners which they then use for the production and export of their own goods. This is called

backward participation in GVCs. Downstream, firms can export intermediate goods to their foreign

value chain partners which in turn use them to make their own exports. Starting with Hummels et al.,

country’s backward participation in GVCs, since it indicates how heavily a country relies on imported

inputs to produce its exports. To capture a country’s forward participation in GVCs, the TiVA data set

allows a further decomposition of a country’s domestic value added into two subcategories: (1)

The main actors in GVCs are not countries but firms. One way of illustrating GVC participation is by

looking at the number and share of firms that both import and export. These “GVC” firms account for

only about 15 percent of all trading firms on average , yet they capture almost 80 percent of total trade .

These are the “superstar” firms, many of them multinational, that drive countries’ trade performance.

Foreign investment by these firms is a key driver of GVC participation.

Global value chains and the fragmentation of trade policy coalitions

Posted by indiainvents at 4:08 AM No comments:

Geospatial data is data about objects, events, or phenomena that have a location on the surface of the earth. The location may be static in the short-term, like the location of a road, an earthquake event, malnutrition among children, or dynamic like a moving vehicle or pedestrian, the spread of an infectious disease. Geospatial data combines location information, attribute information (the characteristics of the object, event, or phenomena concerned), and often also temporal information or the time at which the location and attributes exist. Geo-spatial data usually involves information of public interest such as roads, localities, rail lines, water bodies, and public amenities. The past decade has seen an increase in the use of geo-spatial data in daily life with various apps such as food delivery apps like Swiggy or Zomato, e-commerce like Amazon or even weather apps.

The Ministry of Science and Technology Monday released new guidelines for the Geo-spatial sector in India, which deregulates existing protocol and liberalises the sector to a more competitive field.

Posted by indiainvents at 9:12 PM No comments:

LG Chem’s petition to ITC alleges that SK Innovation hired more than 70 key employees from LG Chem between 2016 and 2018, including dozens of engineers who were involved in the design, development and manufacture of this advanced battery technology used in electric vehicles, as well as other consumer electronics applications. LG Chem further alleges that, based on its internal audit of the company’s data and communication records, SK Innovations conspired with LG Chem employees to secretly download trade secrets prior to joining SK Innovation, solicited detailed descriptions of their work and trade secret information in resumes for employment, and contacted current LG Chem employees requesting trade secrets therefrom. The alleged scale of the misappropriation spans many years, many employees and many aspects of LG Chem’s trade secrets, from research and development of lithium ion battery technology through manufacturing, testing and sales. Using the stolen technology, LG Chem alleges, SK Innovations won a lucrative deal with Volkswagen, beating out LG Chem for that contract, with losses estimated at over $1 billion.

International Trade Commission (ITC) , on Wednesday, barred the import of batteries meant to power the new electric Ford F-150 pickup, the most popular line of vehicles in the country for four straight decades. The batteries, made by South Korean giant SK innovation (SKI), were also intended for VW’s new crossover SUV, called the ID.4, which the German carmaker has planned to make in the U.S. to compete with the Tesla Model Y. But now, both companies must find another battery.

Posted by indiainvents at 8:56 PM No comments:

Top 300 Organizations Granted U.S. Patents in 2020 is a publication of Intellectual Property Owners. Out of top 100, the list full of commercial firms, University of California stands at rank 60. What expalins the decline of patenting by universities? 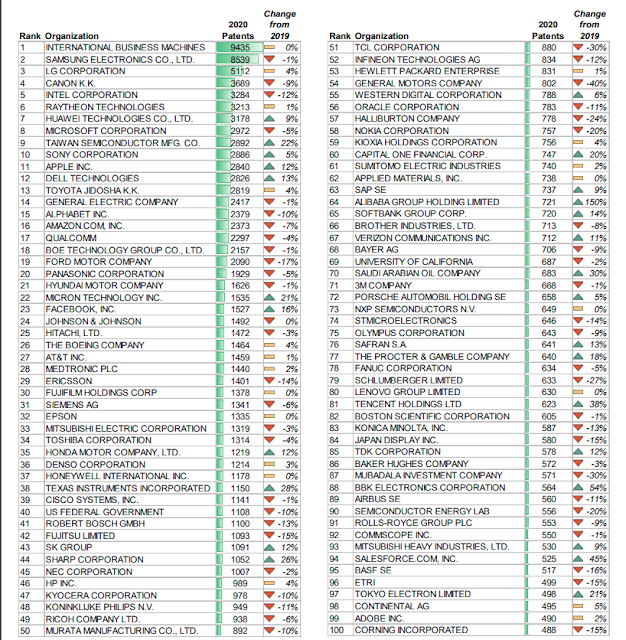 Posted by indiainvents at 11:10 PM No comments:

India gets ready with experiential and demonstration centres for Industry 4.0

SAMARTH Udyog Bharat 4.0 is an Industry 4.0 initiative of Department of Heavy Industry, Ministry of Heavy Industry & Public Enterprises, Government of India under its scheme on Enhancement of Competitiveness in Indian Capital Goods Sector.  SAMARTH Udyog encompasses manufacturers, vendors and customers as the main stakeholders. The experiential and demonstration centres for Industry 4.0 have been proposed to spread awareness about I4.0 amongst the Indian manufacturing industries. Five centres of I4.0 having a unique identity for spreading awareness and branding have been sanctioned under SAMARTH Udyog. It is emphasized that these centres would have resource sharing, common platform of industry 4.0 and network each other’s resources so that the utilization of resources is maximised.Five CEFC (Common Engineering Facility Center) Projects are:
Posted by indiainvents at 9:03 PM No comments: 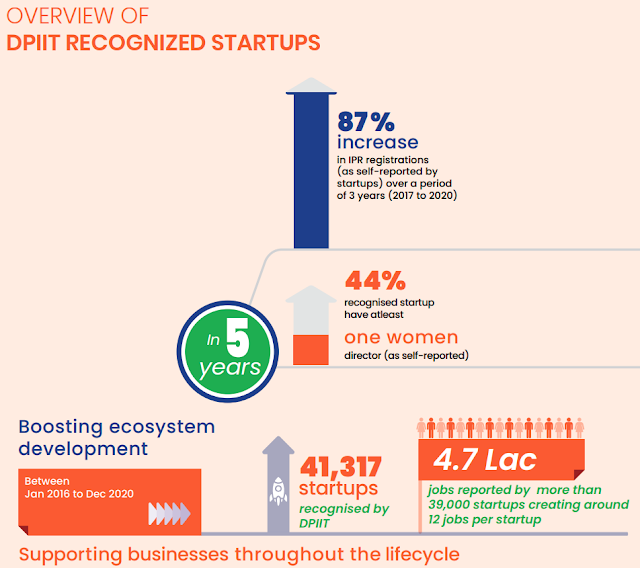 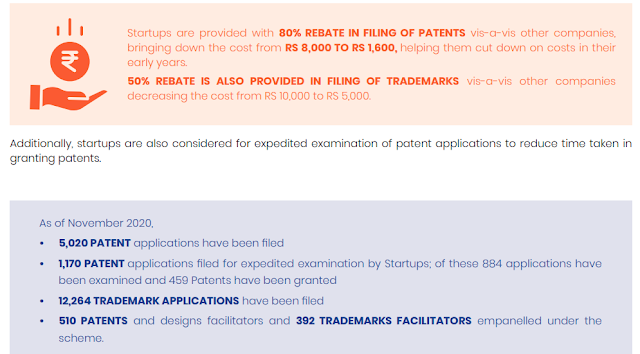 Posted by indiainvents at 3:56 AM No comments:

The government of India has earmarked Rs 18,100 crore as approved financial outlay for implementing the PLI scheme in the Advance Chemistry Cell (ACC) Battery vertical. NITI Aayog and Department of Heavy Industries has been made the implementing agency for the same. Subject to Clause 11.5, 11.6, 11.7 and 11.8, , the Beneficiary Firm shall be entitled to avail the Subsidy in accordance with this Agreement for a period of 10 (ten) years from the Appointed Date.Notwithstanding anything contained herein, the cumulative Subsidy payable by the Government to the Beneficiary Firm during the Term of this Agreement, shall not exceed INR 1,420 crore (Rupees one thousand and four hundred and twenty crores) per GWh.

Plan to develop local capability was more elaborate and layered in Europe.  The European Battery Alliance (EBA) was launched in 2017 by the European Commission, EU countries, industry, and the scientific community. 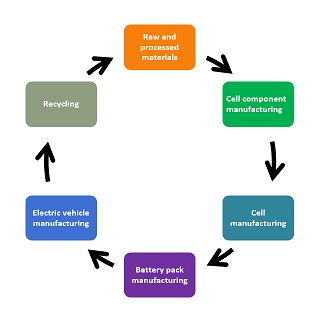 This was followed by 1st round of 3.2 billion funding in 2019.The European Commission has approved under EU State aid rules an Important Project of Common European interest (“IPCEI”) jointly notified by Belgium, Finland, France, Germany, Italy, Poland and Sweden to support research and innovation in the common European priority area of batteries. 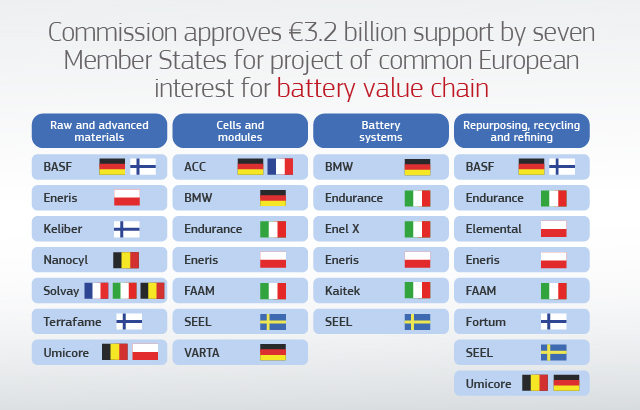 2nd round of 2.9 billion public support was announce in 2021. The project, called “European Battery Innovation” was jointly prepared and notified by Austria, Belgium, Croatia, Finland, France, Germany, Greece, Italy, Poland, Slovakia, Spain and Sweden. The twelve Member States will provide up to €2.9 billion in funding in the coming years. The public funding is expected to unlock an additional €9 billion in private investments, i.e. more than three times the public support. The project will cover the entire battery value chain from extraction of raw materials, design and manufacturing of battery cells and packs, and finally the recycling and disposal in a circular economy, with a strong focus on sustainability. 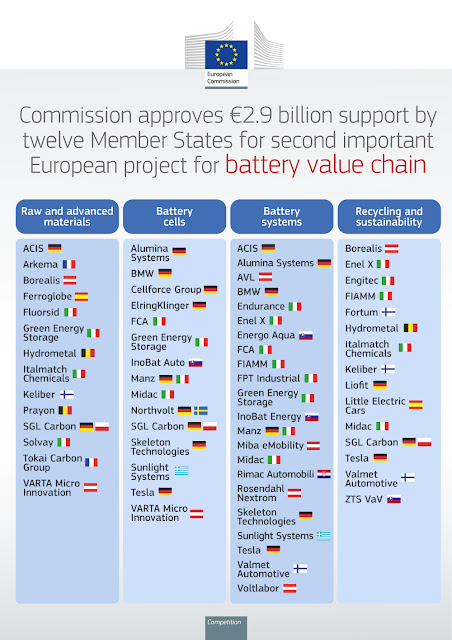 Posted by indiainvents at 9:07 PM No comments: